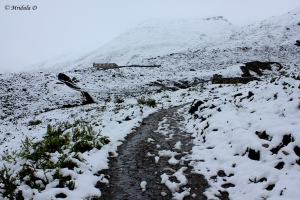 Trekking Agencies’ Association of Nepal (TAAN) has deployed two helicopters for rescue works in Annapurna Region after massive snowfall left many trekkers stranded in different trekking areas in the region. TAAN executive members Pasang Tendi Sherpa and Ang Temba Sherpa are coordinating rescue works in Manang. An Airbus AS350 B3 helicopter has been deployed for rescue works in Manang. The chopper was deployed for rescue work from early morning. Similarly, MI-17 helicopter has been deployed for rescue works in Mustang.
Quoting Mahendra Thakali, assistant CDO of Mustang, TAAN executive member Bidya Hirachan said a chopper operated by TAAN has brought four dead bodies and 14 injured trekkers to Pokhara.
Five bodies have been recovered from Phu area in Manang. Four of the deceased are Canadian and one is from India. Panorama Himalaya has confirmed death of its three Canadian clients in an avalanche. It has rescued three Canadian trekkers. Similarly, Nepal Hidden Trek has confirmed death of a Canadian woman.
Many trekkers are missing in stranded in different areas in the Annapurna region like Tilicho Lake, Dhaulagiri Base Camp, Phu and Thorang Pass and Larke Base Camp in Manaslu Region.

This entry was posted on October 16, 2014 by tourismtimesnews in Uncategorized.